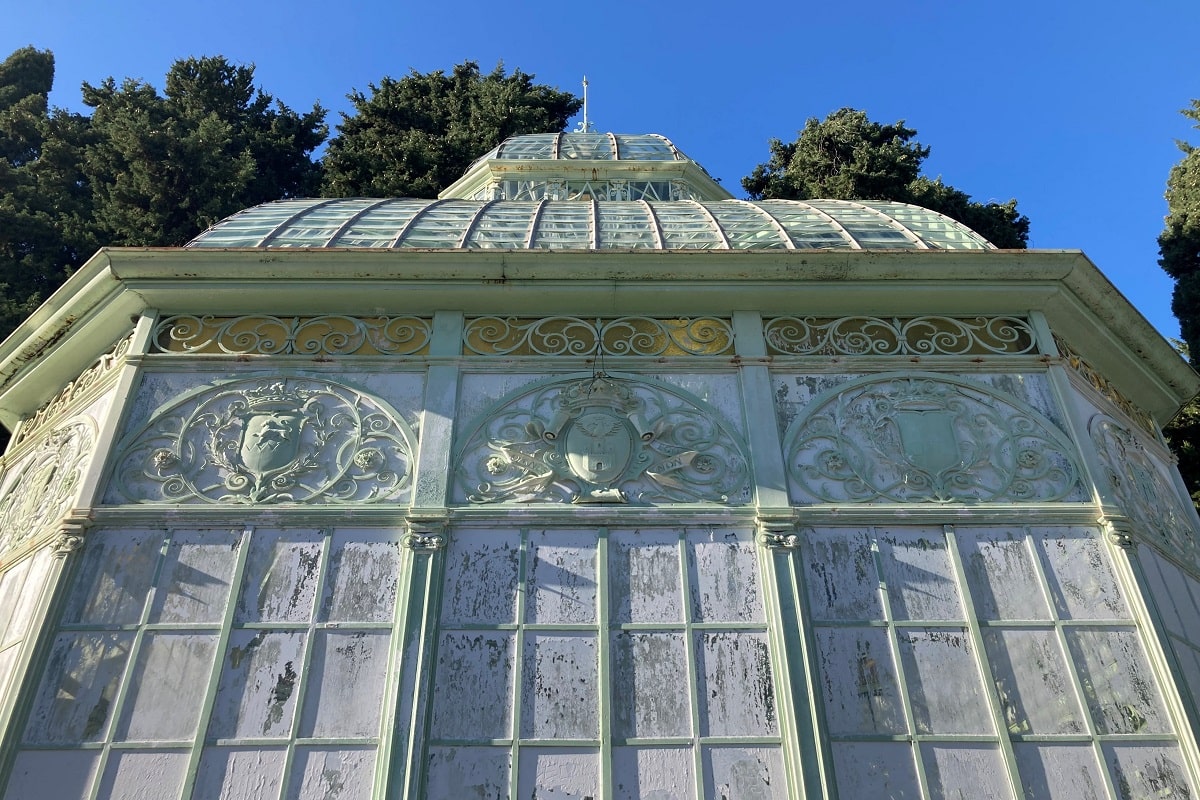 Coats of arms outside the Greeenhouseof: Marquise Pallavicino house pride

Inside Villa Negrotto Cambiaso park, one of the most beautiful in Liguria, the monumental liberty-style greenhouse, dating 1931, overlooks with its beauty.

This particular structure was designed by architect Lamberto Cusani, inspired by large pavilions of the national exhibitions held around the world the years from 1850 to 1938 and by English and French greenhouses. It was commissioned by  Marquise Matilde Negrotto Cambiaso, who probably wanted to cover it with a particular message of pride.

Everyone is well aware of the shape and colours of the large greenhouse, studied in depth in its various shades, but we advice to stop for a while observing a detail that often escapes: the coats of arms of some of the most important Genoese families decorating the lunettes of the beautiful entrance.

Analyzing them carefully we notice a singular detail: the crests of the families linked to the history of the large villa are placed in a secluded position the one of  Negrotto Cambiaso, owners of the property  on the left of the entrance door and, on the right, the one of  Pallavicino, former owners of the villa.

On the centre, within a much more majestic setting, stands a particular shield, bearing the emblems of a family apparently unrelated to the history of the Castle.

It is the coat of arms of Matilde (the oval shield was typical of Personal coat of arms of women) which, however, does not show the insignia of Negrotto Cambiaso family, but that of the powerful and almost “legendary” Giustiniani family, the Marquise birth surname.

Matilde assumed the title of “Negrotto Cambiaso” only in 1923, marrying the Marquis Pierino, who was direct heir of the Sauli Pallavicino by his mother, and of whom remained a widow in 1925, gaining ownership of the villa.

According to the heraldic laws, the Marquise should also have depicted the elements of her husband's family in the coat of arms.  However as  incredibly presenting only those of her family, she gives us the suggestive impression of her pride ofbelonging to the powerful compages of the Giustiniani, who were protagonists of the Republic of Genoa enterprises in the Dodecanese islands.

The coat of arms of the Giustiniani, inside a "normal" shield and therefore not personal, appears twice more along the side walls of the greenhouse, once again suggests Matilda's desire to underline the pride of her own origins and independence that should not have been "choked" by a surname that was not hers: a woman even before a noble.